Tatami is traditionally made from a plant called "IGUSA".

"IGUSA" naturally has a many benefits.

Igusa is an air purifying plant. Inside Igusa, there are lots of overlapping honeycomb-like hexagonal structures, making hundreds of little cells. Therefore, the surface area is large, and the sponge-like structure adsorbs nitrogen dioxide as well as formaldehyde, purifying the air.

Igusa is exceptional in absorbing moisture, and can release the stored moisture when it is dry. For example when tatami mats are laid wall-to-wall in a room, they are able to store about 1.8 L of water. Igusa absorbs and releases moisture according to humidity, keeping the humidity relatively constant.

The absorbency of Igusa is 2.5 times of that of cotton!

Igusa bed sheets can absorb about 2.5 times of sweat compared to cotton sheets.

Igusa is able to reduce malodors including odor from sweating, pet and smoke smell by reducing chemicals that cause the odors such as ammonia, acetic acid, isovaleric acid, trimethylamine, indole, 2-nonenal and pyridine.

It is said “Tatami brings the forest indoors”.  Igusa contains the same aroma component as in trees, which is “phytoncide” . This “phytoncide” is said to have big contribution to the healing effect of “森林浴-Shinrinyoku-Forest Therapy”.

So, why not introducing the tatami in your room? 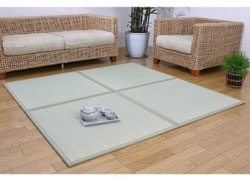 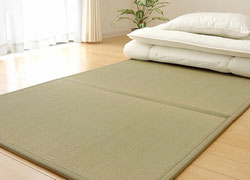